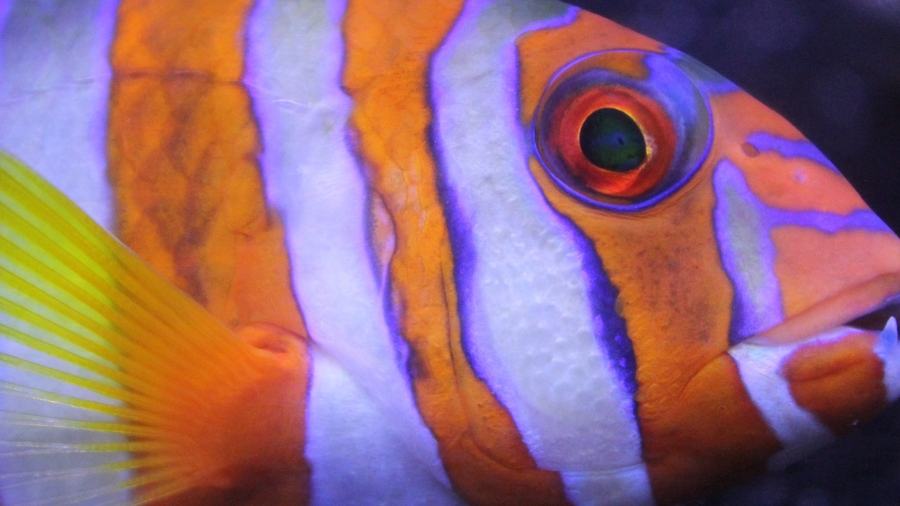 The Harlequin Tuskfish has a fairly widespread distribution in the Western Pacific and can be found from Southern Japan to Australia. Specimens collected for the aquarium trade typically come from the Philippines, Indonesia, and Australia. Adult tusks are generally found as single specimens patrolling areas of sand and coral rubble in shallow coastal reefs, but they can occur in small loose groups in the vicinity of caves and overhangs on reef slopes. Juveniles are usually solitary and secretive and can be seen along reef walls. Their diet includes most hard-shelled benthic invertebrates, small crabs, shrimp and fish.

Unlike many wrasses, the Harlequin Tuskfish is not sexually dichromatic or dimorphic. In other words, you can’t easily distinguish males from females based upon external characteristics. It’s best to purchase and maintain single specimens in the aquarium.

The Harlequin Tuskfish is a hardy and undemanding fish in captivity. After an initial period of acclimation, they become quite bold, but never stray too far from the protection of the reef. These are long-lived fish that grow quickly in captivity, so the minimum recommended aquarium is at least 36 inches in length and 60 gallons in volume. Bigger is definitely better! The Harlequin Tusk makes a great addition to the fish-only marine aquarium or a full-blown reef aquarium. They generally ignore sessile invertebrates, but large specimens are capable of eating small fish, shrimp and crabs. They usually ignore resident shrimp and small fish, but may misinterpret new additions to the aquarium as food. It’s best to add any new bite-sized fish or shrimp after the lights have gone out. This is good advice when adding any new specimens to an existing community of fish. It gives the newcomer a chance to gain its bearings and find a hiding place before having to deal with potential aggression from tankmates.

Unlike many wrasses, tuskfish don’t bury in the sand at night, so a substrate is optional in a tuskfish aquarium. I prefer a sandy substrate though because it encourages the production of many small life forms, such as gammarid shrimp and polychaete worms, which provide a secondary food source for the tuskfish to graze on throughout the day. A reef built out of live rock makes a great background for a tuskfish. They need the comfort of being able to dash into the rockwork if they get spooked and to sleep at night. Live rock should be arranged to form caves and overhangs, which will give the tuskfish a sense of security. Some areas of reef rubble can also be included in the setup. This will give the tuskfish a place to explore for food items and serve as a breeding ground for many small shrimp and worms that reproduce in marine aquariums.

Harlequin Tuskfish have no special requirements as far as water quality and lighting, but like most reef fish, they do best at natural reef parameters. Specific gravity between 1.023 and 1.025 at a temperature between 78 and 82 degrees Fahrenheit will suit the tuskfish fine.

Although the Harlequin Tuskfish is an indiscriminate eater, its diet should consist primarily of meaty seafood. This is important for maintaining the health and vivid coloration of the tusk. Chopped krill is particularly good because it contains natural color enhancers. In addition, chopped shrimp, squid, and non-oily fish can be part of a well-rounded diet.